CELEBRATING THE NEW YEAR-1861 & A WEDDING

ISLANDERS ATTEND A NEW YEAR'S EVE DANCE AND A WEDDING

JANUARY 1861 - A. S. Kelley reported  “New Year’s Day. Pleasant. Had lottery at the Store, Henry Worden drew first prize, bbl flour. Chas. Nelson also had lottery at Himmeleins. Dance at the Island House last night, 28 couples.” This dance was described in detail by another writer. “We more than half made up our minds to stay in our sanctum and let the Senior go to dance the old year out and the New Year in; but valor got the upper hand of discretion. [The Editors of this issue of the Islander were M. K. Holbrook (Senior) and E. Huntington (Junior).] So we finally concluded to go also inasmuch as we had heard all about the wedding and as how the happy pair would be there. [Homer Woodford and Rosetta Moore were married on December 30.]

A New Year’s dance and wedding celebration was held at the Island House and a lottery was held at The Store on the Corner the next day. 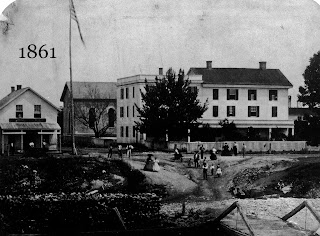 Then too, we were reliably informed that a gold ring and a 5¢ piece would be placed in the brides loaf, which as we interpreted it, meant happy is the one who should get the ring and woe be to him or her who should be so unfortunate as to get the 5¢ piece. [Baking a ring into the wedding cake is an English tradition, said to be a symbol of bliss and happiness. The guest whose piece of cake contained the ring could look forward to a year of uninterrupted happiness. The 5¢ piece apparently represented an end to matrimonial aspirations.]

Here was a kind of lottery, in which we stood just as good a chance as anybody of getting the gold ring aforesaid. While the chances of getting the 5¢ piece were about as good as being struck by lightning in a clear day. This train of reasoning being somewhat satisfactory, told the Devil to see to the office after promising to bring him some of the cake &c. He said he would do his best, with which assurance, went and put on our best dickey and well knowing that as long as it was generally understood that editors have no souls, should have to trust to something besides personal accomplishments. Having fixed up, as before mentioned, donned our hat and overcoat and started for the Island House, full of hope and high anticipations, a little fearful however as to whether the ladies would condescend to dance with the Local when the old gentlemen himself was present, were happily disappointed however, as our fears turned out to be wholly unfounded.

Got to the scene of action just in time to see the bridal party drive up to the gate in a two horse vehicle. Couldn’t say positively how many there were in it, but when they commenced spilling out, it put us in mind of the picture accompanying the old melody, which runs somewhat as follows, ‘There was an old woman that lived in a shoe’ &c, (we will not repeat the remaining lines as they are doubtless familiar to most of our readers).

The dance soon commenced in which we, of course, participated after having procured a small piece of yellow pasteboard with the two words ‘Admit One’ on one side and the number 211 on the other. Didn’t like to expose our ignorance by asking what it was for, so put it in a safe place to wait for something to turn up. In a short time found that it was number 21 in the ring and five lottery. Being much pleased at the information and went on dancing to pass away time. ‘Only this and nothing more.’

About 11 o’clock and 45 minutes, saw the crowd marching in the ball room and wishing to do as the rest did, formed into the ranks and marched too. Pretty soon the head couple started for the dining room, and human nature like all the rest followed. The man at the door took our ticket and we passed in, where to our infinite delight and gratification, a long table was spread with everything that was beautiful to the sight and sweet to the taste. Such as only the amiable and popular landlady could prepare.

The bride’s loaf occupied a prominent position among the good things and looked very tempting withal. Took a seat in close proximity to it and commended on the chickens and other fixings. In a short time the frosted loaf was called to its maker and carved into sections about the size of a piece of cheese, more or less, which inasmuch as the whole cake was about the size of a full moon, made our chances of getting the ring look rather slim. Waited with breathless anxiety for it to be passed around. Pretty soon performances commenced, watched each piece that was taken off wither an ever wakeful eye, and to our greatest conceivable joy, the lucky one was not taken when it reached our abode. Selected a piece very cautiously and forthwith commenced looking for the prize. Pulled it all to pieces and turned them over and over again but all to no purpose.

Consoled ourselves with the thought that it might have been worse, and kept a good lookout to see who should be the lucky one, but it never was revealed so the presumption is that the valuable prize was swallowed. The Five came out all right.

The excitement being now over, went back to the ball room and danced [our] cares away. Just as we were getting ready to go to our parental abode, were requested by a friend to come to town in the morning and invest 50¢ in a lottery. Told him rather short that we didn’t believe in lotteries as much as he did.”