THE OTHER INSCRIPTION ROCK ON THE NORTH SHORE
By Leslie Korenko

We all know that our Inscription Rock on the south shore is world famous, but it seems everyone is suddenly interested in the OTHER inscription rock, which was located in the North Bay near the State Park beach, half way between the boat launch and the swamp.

The results of a monumental task, the chronicling of Indian antiquities, was published in 1853. It was an extensive discourse on Indians published by Henry P. Schoolcraft and illustrated by S. Eastman, Capt. U. S. Army. The publication was entitled Information Respecting the History Condition and Prospects of the Indian Tribes of the United States, Collected and Prepared under the direction of the Bureau of Indian Affairs per act of Congress of March 3rd, 1847. There were five very substantial volumes published between 1853 and 1856. Parts two and three made mention of the pictographs on Kelley’s Island and the history of the Indians in this area.

In Plate 34 (below) the island was shown with the locations of mounds, earthworks, and even a few houses. Schoolcraft noted that “at the earliest periods all except the old fields bore a heavy growth of hard wood timber. Much of it is still covered by this ancient forest, in which it is probable [that] future discoveries of an archaeological character will continue to be made. The island is now readily accessible by a steamboat wharf which has been erected on its southern shore by Mr. Kelly, the present proprietor.”

Schoolcraft identified the location of both pictograph rocks and several Indian ‘forts.” 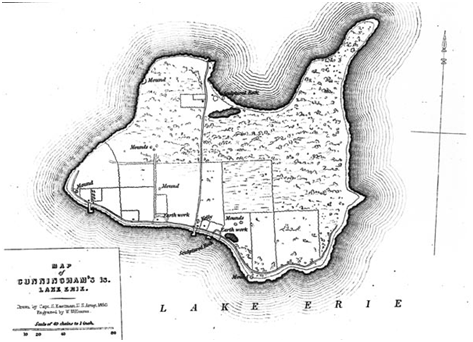 He wrote; “On a bay on the north shore of the island there is a brief pictograph inscription on a limestone boulder, which has been reversed by the action of tempests on that shore.” In another area he identified the rock as being a granite boulder. 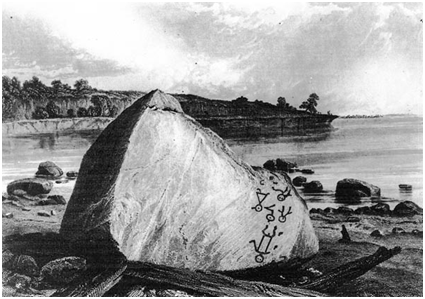 Schoolcraft believed that the north shore rock had been overturned, explaining why the pictographs appeared upside down. This rock was located just west of the mouth of the North Pond. He described it as “a granite boulder partly bedded in the sand and except at low water, not easily approached. Were one not told that it had a name and a record, it would attract no attention and but few of those who continually pass it have the slightest thought of it. How thick it may be is not easily ascertained as it is partly concealed in the sand, but it shows above water some 5 ft., and has a width of about 5 ft., and is many sided… it is but slightly cut in and can only be discovered and traced by a persistent examiner.”

These are the pictographs on the North side rock.

One interpretation of the pictographs on the North Side Rock identified the individual figures:

You have to wonder how he could determine that the man was of “far-seeing intelligence” or that another was of “high influence and energies.” This was a much simpler time.

The North Side Inscription Rock was still visible in 1888 as this photograph shows. The K. I. Lime & Transport Co. dock and lime kilns at the North Bay quarry appear behind it. 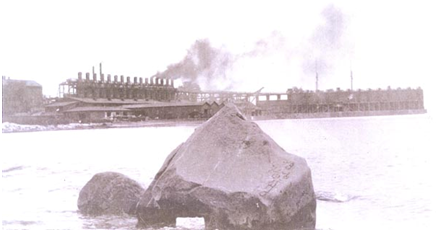 Mildred Fisher indicated in her thesis on island geology that the north shore rock was already gone in 1922 and in 1927, Captain Frank Hamilton confirmed that the rock was covered by sand.

Islanders, however, tell stories about building campfires against the rock in the 50’s and that the heat cracked the rock. Another theory is that it was moved to the beach area and was one of the rocks near the entrance to the beach, but with the engraved side buried in the sand to prevent vandalism. If, indeed, the boulder had been limestone, the engravings would have been worn away by the action of the sand and waves rather quickly leaving one to wonder if the campfire rock was actually the inscription rock or just another big boulder that was moved near the shore by wave action.

In 1978, G. Michael Pratt speculated that the petroglyph rock had been dynamited in the early 1900’s during the extensive quarry operations. However, as it was resting in shallow water and outside of navigation paths, this is unlikely. Unfortunately, researchers have latched onto this theory and, without digging any further, continue to repeat it. So thus, history is re-written! Pratt also believed that a fragment of the rock was sent to the Smithsonian Institute, but there is nothing to support this.

What happened to the rock remains a mystery, but theories abound.