The playground built by our community

In looking back, this park has been a big part of our community history. This year the KI History Museum has been posting articles from the 1950s, and this one brought up a lot of memories. 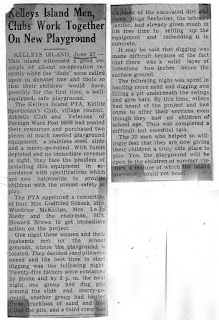 Several years ago, the Kelleys Island Landowners Assoc. moved its Homecoming event to this park (it used to be downtown). What a great move. There was more space, a pavilion with picnic tables, a water faucet and a big area for tents and games.

But, what’s a park without a safe, fun place for children to play? The equipment was old with just a really tall slide and a few swings. The merry-go-round (now called meat grinders) had already been removed. None of the equipment met safety standards. 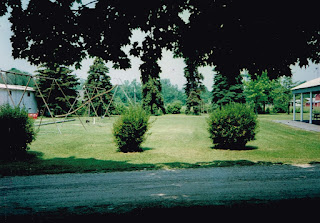 It was time for an upgrade, but it would literally take a village to make it happen. So 25 years ago (1996), a new playground was born.

HOW IT WAS FUNDED - The project was made possible through several grants from the Community Development Block Grant program, ODNR’s Recycle Ohio, and a grant from Erie Metroparks. In addition, the community rallied to the Board’s request to raise money for the project and over 100 individuals, organizations, and businesses donated over $6,000. Over 20 volunteers (totaling hundreds of volunteer hours) worked tirelessly to get this complex installed and local business donated food, ferry fees and materials to keep it moving forward. The project took several days to complete. 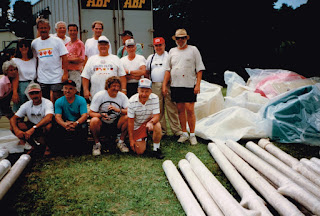 WE EVEN THANKED THE TRACTORS! 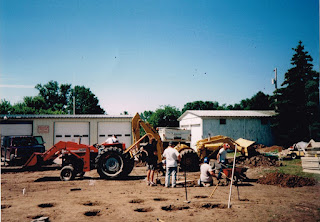 Two tractors did the preliminary clearing work and drilled the holes for the support posts. Special thank-you letters were sent to The Big Red Tractor (Hugh Lange) and the Big Yellow Tractor (Jim Seeholzer).  Yes, they were sent to the tractors in care of their operators. The letters said: “You and your operator…are to be commended for your diligence in seeing this project through. Your adaptability to the various drill bits made the drilling of the 70+ holes possible. Many comments were made about your delicate maneuvering around this small site. We know for a fact that the children who visited the site were just as enthralled with your work as they were with the new structure being erected. I also have to compliment you on your patience in dealing with the people who were constantly giving you conflicting instructions or trying to improve on your already perfect technique.” 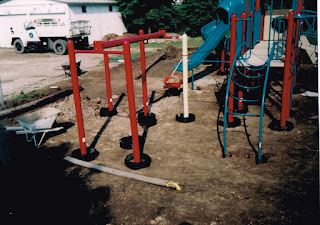 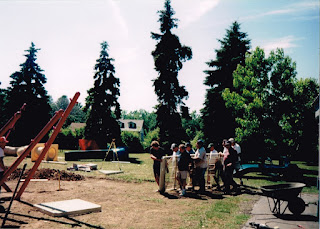 There were thousands of pieces and parts and almost 7,000 pounds of equipment. It took two tractors, two hired experts, over 20 volunteers and the support of the entire community to make this happen. 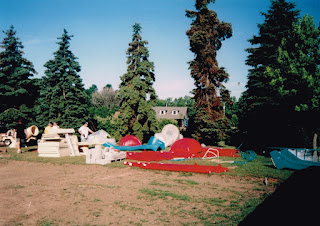 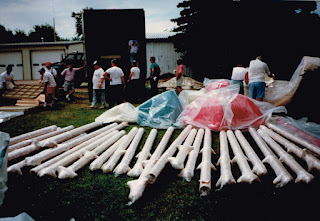 In August, 1996, on the Saturday of KILA’s Homecoming, the Kelleys Island Park Board, dedicated the new play complex that the community built. 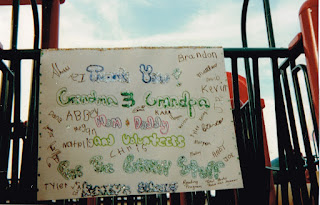 These kids were awarded an "Official First" badge and assigned one part of the complex to use (slide, bridge, ladder, etc.). They were told that even though others may have used the complex during the weeks before the dedication – they could brag that they were the “Official First” to use it! 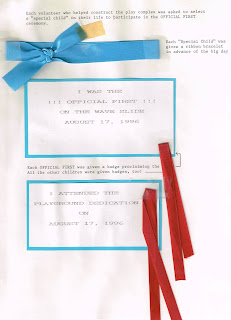 Park Board Secretary, Leslie Korenko, served as Master of Ceremonies as the large group of adults and children, could barely control their enthusiasm. 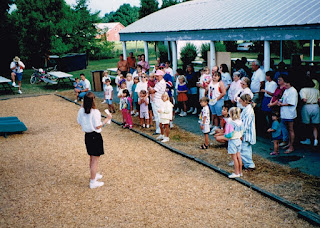 At the “Are you ready?” the children rushed to take their places. 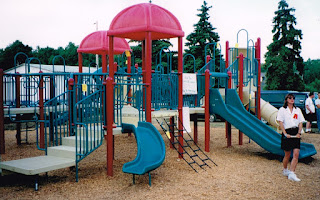 Everyone lined up by their yellow number on the play complex. 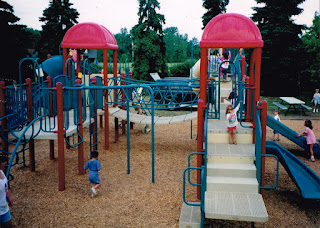 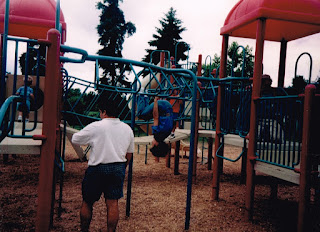 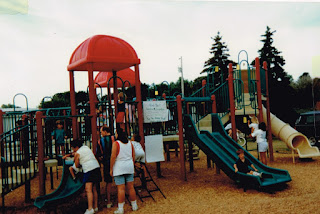 As they eagerly awaited the word – it finally came – Presenting the Official Firsts. 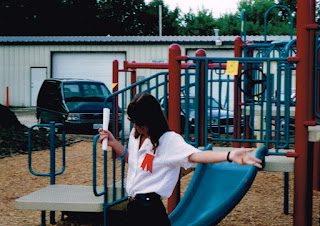 Everyone used their particular piece of equipment at the same time to the roar of the crowd.  There were applause all around.

After  the dedication, everyone played on the new structure, and even a few adults! 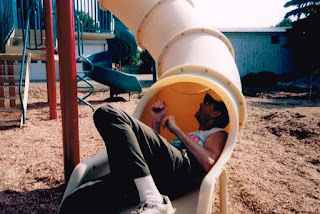 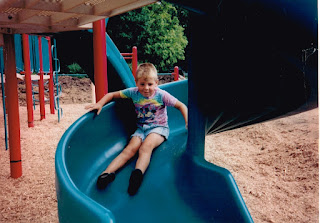 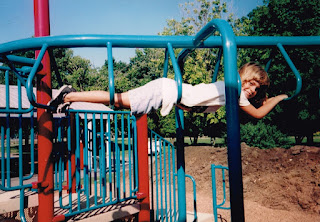 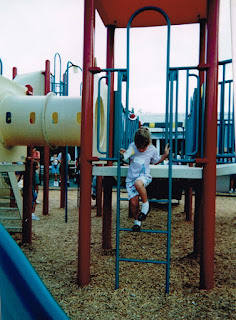 THE PARK BOARD was instrumental in securing the funding and organizing the construction. Park Board members: Bruce Korenko, President; Leslie Korenko, Secretary and Grant Writer; Paul Finnegan; Vicki Finnegan; and Jane Wick.

Particular thanks went to Leslie Korenko who not only wrote the various grants, but sent letters requesting the donations and organized the thousands of pieces and parts in a semblance of order to facilitate a smooth installation and managed all the paperwork (not a small task by any means).