Kelleys Island and the Influenza epidemic of 1920

AN EPIDEMIOLOGICAL STUDY OF THE 1920 EPIDEMIC OF INFLUENZA IN AN ISOLATED RURAL COMMUNITY.

During the influenza epidemic of 1920, this incredibly detailed study was done on the Island. It was the perfect place since it was isolated in the winter with minimal exposure, making it easy to trace origins and transmittal rates. There are loads of charts and graphs and the goal of interviewing everyone on the Island was fully accomplished. In all, 53% of the population contracted influenza and two died.

The study also give us a really good picture of the Island during the winter of 1919/20.  Here are some of the highlights as the study reports on the possible sources of the influenza, provides detailed tracing of how people were exposed, lists the measures taken to treat the illness, and evaluates how effective was immunity for those who contracted influenza in 1918.

Population - During the influenza epidemic of January and February, 1920, there were 689 persons upon the island…The winter population, however, is composed almost entirely of established families who have lived upon the island for several years and thus constitute a community whose members are almost universally acquainted with one another; a condition of some advantage, perhaps, in tracing exposure, contacts, etc.

The island possesses no public water supply, sewer system, theater, moving-picture theater, restaurant, village pump, nor street cars or other means of public conveyance. One central school for both grammar and high-school pupils, one church conducting worship regularly during the winter of 1919 and 1920, and another holding services at intervals, five general stores, a butcher shop, a confectionery parlor, two pool rooms, and a post office afford possible places of contact for the general public. Ice boating, sleigh riding, ice fishing, dancing, and parties are the chief winter amusements of the younger people.

Diagnosis - Unfortunately, during the 1918 epidemic no epidemiologic record was made of the influenza outbreak upon the island; consequently, the information as to this outbreak is confined to a statement of the individual made during the canvass of 1920, as to the presence or absence of an attack in 1918, together with a statement of the preventive measures practiced at that time. The island outbreak of 1920, coming, as it did, at a time when influenza was epidemic over a large portion of the United States and displaying the features of a rapid spread, high attack rate, and a typical symptomatology in the majority of cases, gives no room to doubt that the outbreak was one of influenza.

Shore communication - The formation of ice during the early part of January rendered crossing difficult, until it had frozen to sufficient thickness to support the weight of a man. The first person is said to have crossed on the ice on January 21. For some days prior to this time the somewhat irregular trips of the mailman were the only means of shore communication. The weather remained cold, however, and the ice thickened, and on January 27 the first automobile drove over the ice to the mainland. From January 21 onward an undetermined number of people, of whom we have only partial record, visited the island, and a small number of islanders visited the mainland more or less regularly. The epidemic may be said to have begun on January 24. The attack rate - Among the 689 people upon the island during the course of the epidemic, 369 were affected, an attack rate of 53.5 per cent. There were two fatalities.

You can read the entire study HERE on our website. 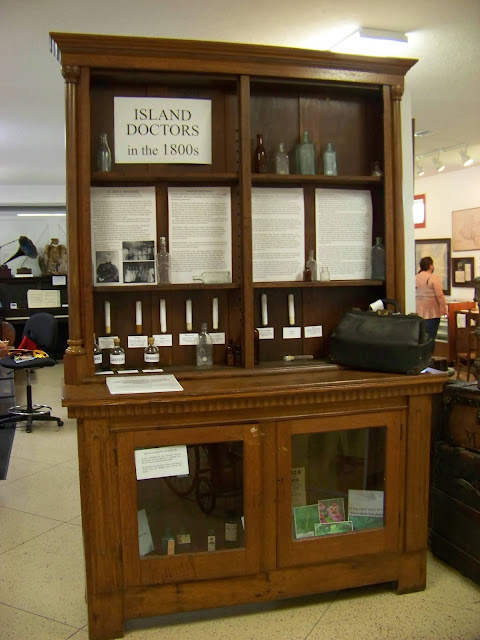 The school building is a large, brick structure, centrally situated on the island. There are six rooms in the building, four of which are used as study and recitation rooms, and two for recitations only, various classes going to them for a few minutes each day. The building is heated by hot air furnaces located in the basement. The water supply is from a large cistern, which stores the water collected from the roof at time of rainfall. No water had been permitted to enter the cistern for over two months. A large stone vessel, kept filled with this rain water and supplied with a vertical type of bubbler which may be touched by the lips, holds the drinking water. There are no common drinking cups. The basement is also supplied with stationary wash bowls and bar soap. Paper towels are furnished. The school is supplied with open privies.