A FIRST HAND ACCOUNT OF HALLOWEEN TRADITIONS – 1868
ON KELLEYS ISLAND

There were many traditions celebrated on Halloween. Most were of Celtic, Scottish or English origins and reflected the heritage of Kelleys Island residents. Hallowe’en was traditionally a time for marriage divination. One custom was for country girls to be blindfolded and then led into a field where they were supposed to pull the first cabbage they could find. If the cabbage head had a lot of dirt attached to the roots, their future husband would be wealthy while a cabbage with a close white head meant an old husband. Eating the cabbage would reveal his nature - bitter or sweet! The ladies brought the cabbages home and hung them above the door; perhaps to attract that perfect mate.

Apples played a role too. The theory was that if an apple was peeled in one long continuous strip, and the peeling thrown backwards over the left shoulder, then the peel would fall onto the floor to form the initials of the future husband. If an apple was eaten before a mirror, his face would be seen looking over the girls’ shoulder.

Nuts were also used for divination. Held over the fire, the way they burned, quietly or exploding, indicated good or bad luck.

Three bowls were often used to predict marriage. They would be placed on the floor, one containing clean water, one milky water and one kept empty. Blindfolded, the ladies spin around then placed her fingers in one of the dishes. If clean water was touched, then there would be marriage. Touching milky water signified widowhood or separation. If the empty bowl was touched, then there would be no marriage at all.

Another predictor involved the stairs and was a dangerous test. If a maid walked backwards down a stairway, by candlelight, while gazing into a looking-glass, she might see the face of her future mate. If a spinster poured melted lead into cold water, it would turn into the shape of the tools her future husband will use. A doctor could be represented by a lancet, a writer by a quill, a surveyor by a chain, a mason by a mallet, and so on. There were any number of ways that a young lady could divine to find her future husband and it looked like all were employed here as one young man clandestinely observed the ladies this Halloween night.

“…it is my duty to inform you…that you are cherishing in your very midst a ‘Klan’ whose midnight depredations and confederations are only to be surpassed by the famous KKK. Having, by the merest chance in the world, obtained a clue to the fact that such an organization exists as well as the date of one of their sessions. We called all our detective powers into requisition and by untiring vigilance and perseverance, under many difficulties, have gained information enough to warrant an expose of the whole affair, for the good friends and neighbors who, if we can save them from depredation similar to those committed on the night in question, will at least accord us their heart-felt thanks.

We learned their meetings were held upon some Holly-day, no doubt so that in case of discovery they might excuse themselves upon the plea of celebrating such and such a time. The evening it was my destiny to witness their doings was the last evening in [October] between the hours of 11 and 12. We arrived at the rendezvous just in time to witness the opening performance.

From our retreat we beheld five dam-sels sally forth blindfolded and hand in hand, but as only a confused murmur of voices reached us, we did not dare venture very close for fear of detection. We could not then guess at the nature of their expeditions to the garden in the vicinity of a cabbage, but we waited patiently for the revealment of the exercise. Soon back, they came pell-mell, each staggering under a prodigious load. Fearful there might have been murder committed from the snatches of conversation which we indistinctly heard; ‘head’ and ‘no heads’, being all the words we were sure of, we cautiously approached the window of an unoccupied room where they had gone to examine their spoils. What think you we saw! Each bore like Herodia’s daughter, a head. The tall dark eyed Miss whose expedition did not prove successful as the rest, the cabbage she held was headless. The unanimous verdict was that her future destiny was to be brainless. The rest seemed to have great satisfaction in their prize, especially will it do to tell it on the schoolma’am. Her cabbage was all head a heart could wish for, despite little Miss Pert’s assertion that she had to look longer for and tug harder to get it then any of the rest. 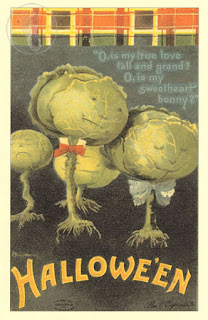 After placing portions of each over several doors, either to repel evil spirits or to entice unfortunate young men under, and thence unite with them in the bonds of matrimony, they proceeded to Act No. 2.

Though anticipating something unusual we were unprepared for the next move, and as it was executed with such expediency the Klan came near discovering our retreat as they went bounding along down to the lake shore, but ‘Adam he lay low’ and hugging up close to the fence, watched. The sight was picturesque in the extreme as in the clear light of the full moon each sylph-like form dipped her – her - her left dress sleeve into the water. Query No. 1 - Did they get dry that night and if so, did they see the spook that came to turn the sleeve so it would dry on the opposite side.

Instead of returning to their former haunts, they struck a bee line for the rear of the premises somewhere in the direction of the propagating house and a conversation, something like the following came to our ears. ‘Where are you going? Out here. What for? Can’t tell yet, don’t know where it is.’ We concluded as they returned very soon they did not find it. Query No. 2 - What was it, and what did they want to do with it?

There was after this quite a lull when active preparations were set on foot for some other murderous design. Gazing through the windows we beheld a fearful sight. Each of the Klan melted a large piece of lead. Supposing they were making bullets what was our surprise to see them pour it into a basin of cold water where it assumed an endless variety of shapes, which seemed satisfactory. They then proceeded to an underground vault, where by a fiery furnace they heated a shovel red hot and thereupon placed something which looked like buckeyes as much as anything, and uttering over them some mystic words, by way no doubt as a charm, watched each as it passed through its fiery ordeal. Soon exclamations were heard, ‘There he goes. There she goes. Why don’t he pop?’ came to our ears.

After some time devoted to this unintelligible jargon they ascended to the upper regions where they arranged upon a table three white dishes. Each was successfully blind folded and let to the table three times when she dipped her hand into one of the dishes. Supposing at the time it was a sort of test or oath to answer in case of emergency, but afterwards found it a joke. Query No. 3 - …which is to be the Old Maid?

Would you know what next? These five wise virgins supplied themselves with a tallow dip and knife not to omit mentioning an apple, when they proceeded to a looking glass [with] their apples. Query No. 4 – Who did they see in the looking glass over their shoulder? 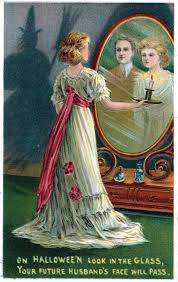 School ma’ams made an expedition down cellar with a lamp and looking glass backwards, which the rest did not venture to do. Query No. 5 – Who did she see in the looking glass looking over her shoulder and why did not the rest go with her? 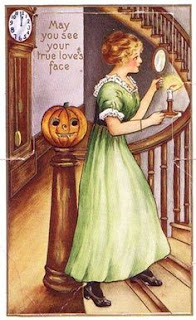 The next expedition was going upstairs backwards. All proceeded slowly but surely until near the top when one of the foremost or according to position the rear most, missing her bearing came down with a concussion decidedly audible. Query No. 6 – Was that bump phrenological?

Soon after this, all seemed quiet and the midnight vigils over. We left the scene convinced that unless active measures were taken to quell further outbreaks, fearful results would ensure, and to the five ringleader and followers, we would say your indiscretion betrayed you and when next you try Halloween tricks, look for witches and spirits still in the flesh as reporters.”