So what is the story about these walls which snake across the Island, looking like historic beasts? 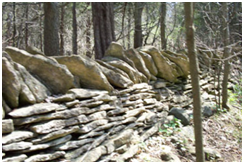 THE RUMORS
Recently we had three queries about our stone fences. The first was a belief that they had been built by the WPA.  President Franklin D. Roosevelt created the WPA with an executive order on May 6, 1935. It was part of his New Deal plan to lift the country out of the Great Depression by reforming the financial system and restoring the economy to pre-Depression levels. In 1939 it was renamed the Work Projects Administration which employed mostly unskilled men to carry out public works infrastructure projects. They built more than 4,000 new school buildings, erected 130 new hospitals, laid roughly 9,000 miles of storm drains and sanitary sewer lines, built 29,000 new bridges, constructed 150 new airfields, paved or repaired 280,000 miles of roads and planted 24 million trees. Oral histories indicate that the WPA was on the Island in the 1930s but they were working on the Glacial Grooves.

Another person wanted to know why there was no historic marker for these walls because they were used by the soldiers during the war of 1812 to hide behind. While there was a small outpost on the Island during this war, fighting occurred mainly on the water near the Bass Islands.

The third query asked why the stone fence along Monaghan Rd on Long Point and was in such disrepair (we don’t’ really have an answer for that, it is on private property).

WHAT WAS THEIR PURPOSE?
One way to settle disputes about cattle, trespass and boundaries was to build good stout fences. These also served as a convenient place to stack stones cleared from fields. Scattered around the Island are remnants of an extensive stone fence system. The fences served to mark boundaries, slow down the escape of cattle, and generally helped to clean up a property. These fences were permanent fixtures, often referenced in deeds. While there are still portions of these fences standing on the east side and the middle of the Island, most of this extensive system has been dismantled. 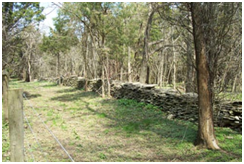 THE FIRST FENCE WAS BUILT IN 1856
The first fence is attributed to Erastus Huntington. He secured the title to a 5-acre and a 1.5 acre plot in 1859, a part of the farm owned by his parents George C. and Emeline Huntington, but as this article shows, Erastus took possession of the lots much earlier. He was just 18 in 1856 when he built the first stone fence on the Island.

“The first stone fence built on this Island was commenced in December 1856 by and for Erastus Huntington across the front of his premises on Lake Street [formerly Water St. and now W. Lakeshore]. He finished the same the following spring. It proved to be a substantial fence and soon after, others followed his example. Up to this time [1861], about 189 rods [over 3,000 ft.] have been built and more are in progress of construction. A good part of it is built of surface stones, which are a nuisance on the land, thus making a useful ‘riddance’ of otherwise ‘bad rubbage.’

In New Germany, the stone were so plentiful on the surface as to be very troublesome, and it was found necessary to remove them. Enough of them were [had] to build a fence across the front, most of which is completed and there is plenty left to build another across the back part. New Germany is the name given to that part of the Island situated up Vineyard Lane 1/21 mile north of its junction with Lake Street. Enclosed as it nearly is, on the front to pedestrians, hogs traveling the lane must present a very formidable appearance. Horses or cattle have never been known to try, whether, ‘the top rail be loose or not.’ We are glad to hear there is more of this substantial fence to be built the coming spring.”

Sections of several stone fences can still be seen on the Island. The most visible ones appear along former pasture lands, like this one along Woodford Road and the another along Monaghan Road, near Long Point. 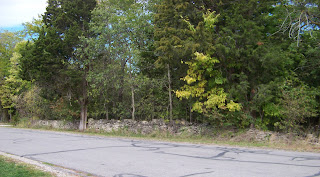 Most of the fences are gone, but you can see proof of their existence in some old Island pictures. A good example is the picture of the German Reform Church on Division Street, which was built in 1866. The fence around the German Reformed Church was made of stone while other sections were split rails. 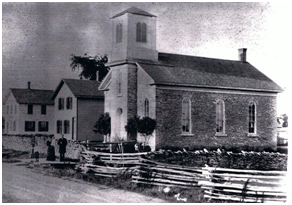 Some fences were topped with flat stones while others give the impression of a prehistoric animal with a spiny backbone. 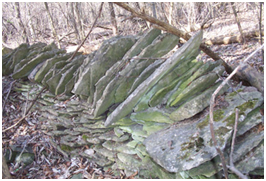 There was a lot of variety in the construction of stone fences, with changes in the top stones marking a boundary change. Sometimes, as with the Long Point fence, large round stones, probably driven onto the land by wave action were incorporated into the design, while inland fences tended to have just flat stones. 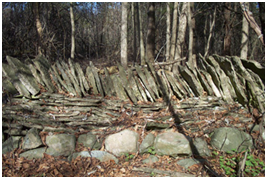 Large stones marked corners of lots and were referenced in deeds. In other areas, hardheads, or large hard stones that were difficult to move, would mark the corner of a lot. 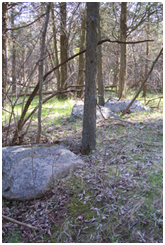 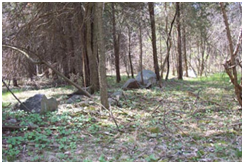