THE FIRST BURIALS IN THE KELLEYS ISLAND CEMETERY

In 1854, the year the cemetery was established. John McDonald, who died on January 14, 1854 at age 26, was the first burial and his headstone still stands. Norman Hills told an interesting story about McDonald, who had been employed in preparing the new cemetery for burial purposes.  He was taken to task for carelessness in his work and his reply was to the effect that he did not care, for he did not expect to be buried there. It so happened that soon after completing his work in the cemetery, McDonald was accidentally killed and became the very first person to be buried in the cemetery he built.

McDonald’s death appeared in Datus Kelley’s Ledger. “A letter from Mr. Addison Kelley informs us of a sad accident which occurred on Kelley’s Island on the January 14th. John McDonald and Hugh Cottenaugh [Cattanach] were blasting stone in the quarry [of William S. Webb]. A blast was put in, which, after being fired, did not explode. Supposing the fuse had not ignited, they went up to examine, when the blast went off, killing McDonald instantly, blowing his head all to atoms, and badly, though not fatally, injuring Cottenaugh, the powder and tamping striking him in the face.” 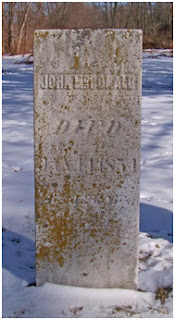 The Cemetery Record listed the second death, and the next to be interred in the new cemetery, as Mrs. Lydia (Estes) Norris. She was reported to have died of Old Age and was the wife of David Norris. She was 76 years old and died on February 14. (Lydia Estes 1778-1854) 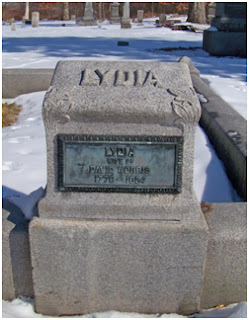 The third recorded death occurred on July 21. Mary Morgan who died in infancy. No other mention is made of her. She was likely the little daughter of Lucinda and William Morgan and this well-worn monument appears to be hers, a lasting and loving tribute to a child lost too soon. 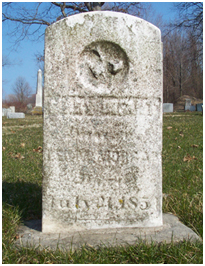 “During the scorching summer of 1854 nearly all in the [Island House] were sick with Dysentery, three of whom died, among them Lydia, wife of W. D. Kelley, a bride of four weeks. On August 22, Lydia E. Kelley died at age 18.” Lydia (Remington) married William Kelley on August 7, and on August 22nd.

Before running its course Dysentery took the lives of several children: August 11, Carro True died at age 10 months and 23 days, then on the 13th Charlie True, 10 months and 25 days, died of Dysentery. On August 14, William Cagney died at the age of three years and six months and was taken to Sandusky for burial. On August 17, Charles C. Reid died at the age of eight months of Dysentery and was taken to Delaware Ohio for burial. On October 8, Dysentery took the life of Thomas Quinn, no age given. Other names for Dysentery included Bloody flux and meningitis.

A letter that Datus Kelley wrote to Horace Steele on August 22, 1854 tells the story of this sad time. “Dear Friend. You probably have heard by a letter to Mr. Hinkley that we found (on our return) a number of the family were sick with the dysentery. Four young persons (children) have died with it, it is very malignant in its character. Lydia was taken a few days ago, we supposed she was getting along well, but this night she has been suddenly taken worse, and now lies dangerously low. She is, and has been all the time at our house. About mid-night. Yours very respectfully, Datus Kelley.

We shall inform you often after this – Wednesday morning. Half past one – Lydia has just expired and our folks wish you to use your best judgment as to coming up here – there is a good deal of sickness – it will not be prudent to keep the body longer than afternoon. Those that come therefore should be here before dark. In great haste and sorrow, Alfred S. Kelley." 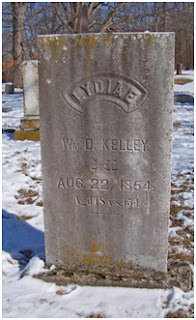 The last death and burial of the year occurred in November. November 3 – “We are informed that a man named George Clemmons [Clement] was drowned yesterday at Kelley’s Island while drawing a sail boat by a line, around the corner of the dock at the landing. The resistance of the boat caused him to lose his balance, and falling into the Lake, he perished before assistance reached him.” The Clement monument stand next to McDonald’s at the north end of the oldest section.

George died without a will and Wm. S. Webb was appointed administrator. An inventory of Clement’s property included: one overcoat, one pr. pants, coat, vest, one pr. Mittens, a comforter, two brushes, Harper magazine, one undershirt, two books, two shirts, two razors & strop and other items. He also owned ½ of a fish pound, appurtenances worth $115, and ½ of the sloop Sportsman valued at $123.33. 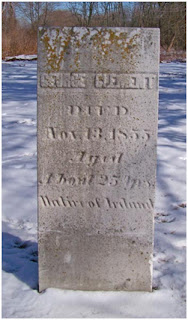 Why not take a quick tour of the cemetery with this video: https://www.youtube.com/watch?v=I6V4yo_eCMs 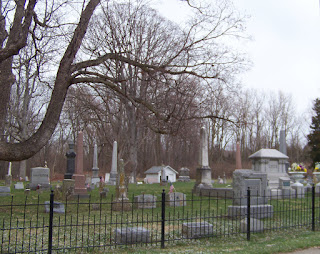 Leslie Korenko is the author of six books about Kelleys Island history and can be reached through her website: www.KelleysIslandStory.com .