Decoration Day was appropriately observed by the people of Kelley’s Island, who at 4 o’clock assembled at Kelley’s Hall, where a very interesting address was delivered by Rev. M. K. Holbrook. During his remarks, he gave a short sketch of the lives of the six soldiers who are buried in the cemetery, three of whom died in the service, one – Mr. Simon Huntington – of wounds. After the address a procession of carriages was formed, which proceeded to the cemetery. The ladies of the Island had brought their choicest flowers, forming beautiful wreaths and bouquets, and the graves of the unforgotten brave were profusely and beautifully decorated. The grave of one soldier is unmarked by any tombstone, and a committee was appointed, consisting of John T. Woodford and Mrs. George C. Huntington to procure funds for the purpose of erecting a suitable monument over his grave. It is perhaps unnecessary to say that the funds will soon be forthcoming from the large hearted people of the Island. The ceremonies concluded by singing ‘America,’ and a benediction by Mr. Holbreck [Holbrook]. The whole proceedings were characterized by a deep solemnity, and at times were truly affecting.”

Memorial Day was officially proclaimed on May 5, 1868 and was first observed on May 30 of that year when flowers were placed on the graves of Union and Confederate soldiers at Arlington National Cemetery.

Memorial Day, originally called Decoration Day, is a day of remembrance of those who have died in our nation’s service. This day of honor has diminished in scope over the years. Once an island-wide observance with parades, dinners, dancing, boat trips, and speeches, the celebration often started in the morning and ended with fireworks well into the night. Now the honored dead are remembered in quiet but well attended ceremonies at the cemetery organized by VFW Post 9908. The more entertaining festivities have been shifted to the annual Islandfest and Homecoming celebrations.

Hundreds of people attended the 2021 Memorial Day ceremony on the Island. 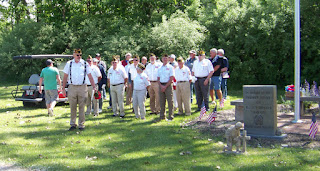 In 2020, it was brought to our attention that Simon Huntington, the first Island soldier to die during the Civil War (the Battle of Stones River), did not have a GAR (Grand Army of the Republic) star or flag. Leslie secured one and had it installed. Now Simon’s death is remembered along with others who gave their lives. 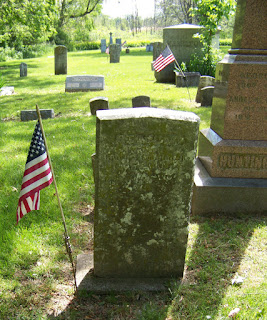 Simon Huntington was the Island’s first, but not last, casualty of the Civil War.