George Huntington, in his presentation to the Fire Lands Historical Society on October 30, 1862, offered this about the man. “Jacob Hay, then as now a bachelor, and one of our oldest residents, was boarding with Mrs. Knowlton at the afore-said boarding house in front of where the Island House now stands. If, as political economists assert, that man is to be considered a public benefactor who causes two spires of grass to grow where but one grew before, then Mr. Hay is certainly deserving great credit, since he has performed a much greater amount of physical labor than any man now living on the island, almost the whole of which was tended directly or indirectly towards the general improvement. For 15 years his time was devoted almost exclusively to clearing land, building fences, putting up small tenements, &c. and since that date he has been employed in making and repairing agricultural implements, &c., and other mechanical pursuits, all tending the same general result. Besides this, there is not a dock on the island but what he has had a hand in the building of it.”

Jake’s many adventures were chronicled in the early days of the island through stories shared in the Islander. Jake was reported to have been born in 1804 making him one of the oldest inhabitants at just 34 years old when the island was settled. He did finally get married, at age 62, to Miss Ellen Fallon, who was 40 years younger than he was. He lived on Kelley’s for almost 20 more years.

In 1836, Jake first visited Kelley’s Island. “Jake Hayes was crossing Cunningham’s Island and on the way he met in the road Mr. Addison Kelley, who at that time was the business agent of D & I Kelley in charge of their Island property and who proposed he should stop and go to work for him. But Jake’s mind, with his late experiences of supporting another man’s family and living himself on smoked sturgeon during the winter [on Pelee Island] fresh in his recollection, at first declined. But Mr. Kelley, assuring him that no such contingency could occur under his administration, showing him by that he had one barrel of flour for every man on the Island, and further that if he should die during the winter, he (Mr. K.) would have him decently buried and would charge him nothing for it. Hayes concluded to accept such generous terms and remain.” It looks like the community fulfilled Mr. Kelley’s promise. Jacob was given a cemetery lot by the Village, he being unable to pay for same, and the Clerk was ordered to make out a deed to Jacob Hay for the cemetery lot donated to him.

His monument, however, would not be installed until 1901 by one of his daughters. Genealogy records simply state that the girls left the Island, and that should be the end of the story. However, in 1901 Anna S. Hayes, the older daughter, purchased a granite cemetery monument for her parents. At that time she was boarding with the Christmann family in Waterville Township near Toledo. There is no record of where her sister Lucy ended up.

“The McNight-Smith Monumental Works of Norwalk, O., are erecting some handsome memorials at Kelley’s Island in memory of some of the earlier settlers who have passed away and now rest in the beautiful cemetery. A large Barre Granite sarcophagus design with polished panels and trimmed in rock face is placed upon the family burial lot in memory of the late Mr. and Mrs. Jacob Hayes. This monument was erected by their daughter, Miss Anna Hayes of Toledo, O.”

Death Records indicate that Jacob died at the age of 73 of apoplexy. He died in Sandusky at the Infirmary. His wife must have continued to live on the property but she died a few months later leaving her little girls destitute. 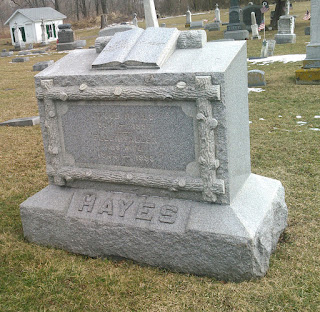 C. B. Quinn was named administrator when Jacob died without a will. His family was listed as wife Ellen Hayes, and two minor daughters, Annie and Lucy, both of Kelley’s Island. Minor children were those under the age of 14 years of age. Jacob’s personal goods included in part; one cook stove and furniture worth $10, and one heatin stove worth $8. His various household items included a table, chairs, sink, dishes, sewing machine, feather ticks, wash stand and washboard, among other things. There was also listed a lot on the Island and $263.21 owed to various creditors. A petition was filed to sell the real estate to cover debts, as the assets were not sufficient. On December 13, 1888 the lot was sold to Mrs. Herman Koster for $1180.00. Koster already owned the adjoining property and dock.

In August of the next year, 1888, Jacob’s widow, Ellen Hayes died of consumption. Ellen’s death would bring the community together, almost. “Mrs. Jacob Hay [Hayes] died last week leaving two little girls in destitute circumstances. Mrs. Hay had been receiving $6 per month from the county infirmary directors which with the rents derived from an old barracks of a building managed to support herself and the two little girls [Anna age 12 and Lucy age 9]. Upon the death of Mrs. Hay, two young ladies, Misses Nettie Cameron and Freddie Kelley, made it their business to see the girls and ascertain their wants, if any. They found them destitute of clothing and immediately canvassed the Island for donations. They succeeded admirably and yesterday quite a number of the ladies met at the assembly rooms of the church and made up a lot of clothing. A few heartless men refused to give anything but told the ladies to send the girls to the poor house. I am glad to say that any such proposition would meet with a storm of indignation from most of our people.

I am informed unofficially that the infirmary directors intend to make the estate repay all that has been given the family. Should this be done it would wipe out pretty much everything. It would be an outrage on common decency to do anything of the kind and it is to be hoped that the probate judge will appoint a guardian for the children who will resist any such unjust proceeding. I think an investigation would show that outside of Sandusky city there are few townships in Erie County which pay more taxes or receive less benefits from the poor fund than does Kelley’s Island. It may be that I am misinformed regarding the matter and for the credit of our infirmary directors I hope this is so.”

C. B. Quinn was appointed administrator of the estate. The ‘old barracks of a building’ was the carpentry shop of Jacob Hayes, commonly called the Hayes Block. It is unclear when Jacob closed up his shop, but nothing had been written about his business for several years. The rents referred to would likely be from boarders or possibly renting out a portion of the building for commercial use.

The Hayes Block – Hayes carpentry shop is on the right and Koster’s Winery on the left. 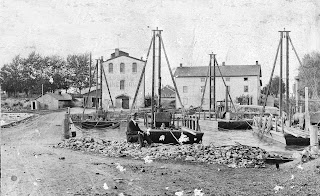 In December, Quinn, acting as administrator of the estate of Jacob Hayes, would sell Jacob’s small lot, containing 25 square rods excepting 2/100 acres sold to Koster in 1884, to Catherine Koster. The court approved the sale and Catherine was the highest bidder at $1180. This is part of what is now known as Koster’s Dock.

By Leslie Korenko. You can find out more about Jacob Hayes at www.KelleysIslandStory.com.